Sometimes I am too afraid to attempt something new for fear I’ll mess it up.  And sometimes I mess up something I’ve done a thousand times before.  In these first few weeks of 2012, I’m trying to care less about perfection and care more about the joy of the process.

Remember this scarf I started another lifetime ago… in January of 2011?

Neither did I, until I bought some new yarn for a new scarf and discovered that I never finished this one.  I felt bad for the lonesome little scarf, forlorn in my craft box, crammed under a bunch of half-finished projects that made the move to San Francisco.

So I started knitting and purling along, until several inches later I realized I had made a big fat mess.

Rather than pull out my stitches, I decided to make my mess into a “design element.” 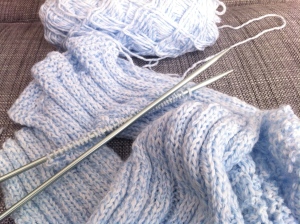 Not too bad… I’ll be wearing this scarf as the winds pick up in SF, and the process of knitting felt soothing and productive during marathons of tv shows, movies, Christmas music, and sitting on the couch with Sam before our holiday travelling commenced.  I’ve spent a lot of time with myself these past few months, healing from surgery and getting used to a new city far away from friends and family.  As the new year gets rolling, and new experiences and opportunities are opening up all around me, I’m trying to embrace my mistakes as part of the process.

Wednesday again! Here’s a peek at my current works in progress. Happy Birthday cross stitch The central scene is done! So now there is just the border and the rest of the “Happy birthday Jon” message to go. Crossing my fingers it will be done in time for his birthday, because most of my crafting […]

The world feels as if it’s on fire, but we’re still trucking along over here. May was another month of social distancing/isolating, and another month of solid reading. I got a little burned out on contemporary fiction, but finished the month with one of the best books I’ve read all year! This year I’m continuing […]

I missed a week, so today I’m sharing five highlights from the past two weeks, as a reminder to stay grateful. 1. 33 2. & 3. Gaga and Pop (and all their hard work!) 4. Family Zoom 5. Currently reading